We're sorry for the lame updates but it was expected, anyway here you have the first tour report:

Sugar Bar - Stockholm, SWE 24/11:
We started the travel down to Stockholm from Avesta kind of early in the morning and after the load-in we headed to Systembolaget to buy some good ol' Glögg. The Sugarbar isn't that wellknown to be a Metal club, but it turned out to be a good debut show anyway. It wasn't the biggest stage, but the feeling was very intense and the freaks that turned up really enjoyed the show. Lots of friends and a mighty drinking session followed. The URN and the DIABOLICAL guys are great, so we're really looking forward to these upcoming weeks!

Bambi Galore - Hamburg, GER 25/11:
After a long drive from Stockholm to Hamburg, through Denmark, we arrived to the venue a bit late. Yet we had no support bands opening for us so after a linecheck we started our set, the show was sick and with great fucking support! Hage from Cyclone Empire and Jan Banan from Sure Shot Worx was there and partying with us. Since it was more or less free drinks in the bar all of us ended up shitfaced. We continued the drinking session for many hours on the way to Tilburg. Frågor på det?!

Live review by Memme at Metal Inside.de here!
Check out some live pictures by Memme here!


013 - Tilburg, NL 28/11:
We arrived early in the morning to the venue and after a while the tourpackage with GRAVE, MISERY INDEX, ARSIS, THE LAST FELONY and THE ROTTED got there as well with their modern fancy tourbus. This show was a special one, since there were three tours colliding at the same club and day. Besides the above mentioned bands there was also BLACK BREATH. Everything with the club 013 is just PERFECT, certainly one of the best and most organized clubs in Europe. Even if we had a massive hangover the gig went fucking awesome, the huge INTERMENT horde of fans went fucking crazy! Of course we ended up hanging out with our friends in GRAVE at their backstage room, drinking and steaming until they had to leave the building because their bus driver wants to leave early every night. Therefore, we continued the party at the famous Metal pub Little Devil, and made friends with the BLACK BREATH guys. So as you can imagine, we missed the load-out and made the DIABOLICAL members just a little bit pissed off. Life's good!

AJZ Bahndamm - Wermelskirchen, GER 27/11:
We all woke up in the cold filthy bus with hangover from hell and after some nice food and beers in the city we loaded in all the stuff (yes, we DID help out with the load-in). Just before our soundcheck Martin couldn't find his bass anywhere so we thought it was lost in Tilburg. So Martin borrowed a bass from Urn for the show. Apparently, our sound was crushing, and we got killer response. The club was really neat and sort of "squaty" and the catering was really awesome. Because it is a Jugendhaus they are not allowed to serve hard booze, only beers and wine, but luckily we got three bottles of booze that saved the evening and night. Leeeeeeeeeeeeeeeeeiiiiiiiiffffff!!!! 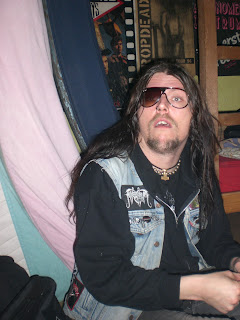 Lost and found: Martin's bass was in the bus!! The venue was at a corner of a big shopping center in the suburb and even though it was a sunday evening quite alot of people showed up. After the local support we entered the stage and delivered! Great response and we even played the Carnage cover this evening! After the show we had to celebrate with some nice and cold Red Bull & Vodkas of course, questions on that? DIABOLICAL and URN had good response as well and all the bands sold alot of merchandise. Then we left Italy for Ljubljana in Slovenia during the night. Torn From The Fucking Leif - Viva Italia!!!
Live review by Wolf Age here!
See two liveclips from Decimo Secolo: Torn From The Grave // Morbid Death & Torn Apart.
Day Off - Ljubljana, SLO 29/11:
Again we woke up with the hangover from hell in a snowy Ljubljana. After some boring freezing hours in the bus, we decided to check in at a nearby hostel to get a much-needed-hot shower and a nice clean bed. After the shower we went to the city and ate some nice food and of course had plenty of drinks. Just enjoying the day off...in the sun!
Posted by INTERMENT kl. 15:01 No comments:

The "Black Steel Worship Tour" starts on Wednesday 24th and we can hereby reveal the Interment touring line-up which will be a bit different.

Due to some non-interesting reasons John and Kennet can't join the crusade, therefore we have Perra Karlsson (Nominon, ex-In Aeternum etc) filling in behind the drums and Toob Brynedal (ex-Insision, ex-Genocrush Ferox) on the second axe.
Posted by INTERMENT kl. 23:15 No comments: 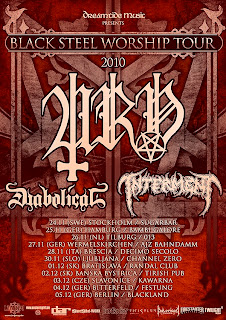 Now it's only two weeks left before we begin the European madness together with URN (Fin) and DIABOLICAL (Swe). First date will be on Swedish soil at Sugar Bar in Stockholm 24th of November. You can follow us on the road to hell with this blog to see what's going on and we will try to update it as much as we can!! Prepare for total armageddon!!

INTERMENT
Follow us on the road to hell! So come and join us Death Metal freaks...